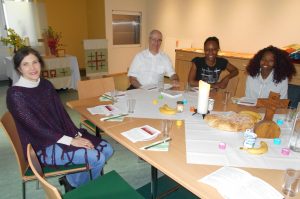 A joint beginning to Worship February 2, 2014

The Epiphany Season Cross (Christmas arc + the dove of Baptism)

Look for our sign in front of the church on Sundays

New Hope UM Fellowship has been very active since the Fall of 2013 when our new cross was constructed and given by Mike Smith. Earlier in the Fall, our host congregation and we decided to begin the process to move to a more dedicated space at the other end of the hall so that our sister Vietnamese congregation can also meet before noon on Sundays. Our cross, seen here has the words of the four Sundays of Advent written in the four languages of the Host and Migrant UMC coongregations in Frankfurt – German, English, Tw’i, and Vietnamese.

Mike W. Smith made our Cross which can change with the Church Seasons.

The red band repeats the words for “Peace” in English, Tw’i, German, and Vietnamese for Christmas